Vitamin B12 in an easily absorbed form

Vitamin B12 Methylated from Healthwell is a plant-based supplement with vitamin B12, with 500 micrograms of B12 per capsule. The supplement contains methylated B12, which means that the vitamin is already active and ready for the body to absorb. Vitamin B12, or cobalamin as it is also called, is an important vitamin that contributes to several functions in the body. Among other things, it is necessary for blood formation and for the normal functioning of the immune system. Vitamin B12 is found almost exclusively in animal products, which can make it difficult to get a sufficient amount if youre vegan or eat a limited amount of meat and fish. With Vitamin B12 Methylated from Healthwell, you can easily add extra vitamin B12 to your diet!

What does methylated B12 mean?

Methylation is a biochemical process by which the vitamins we intake are converted into forms that the body can absorb. However, some people lack the enzyme needed for the methylation process to function normally, and can therefore not absorb the vitamin via the diet or dietary supplements. Healthwell Vitamin B12 contains B12 in the form of methylcobalamin, a methylated form of B12 that does not need to be converted in the body. Since the vitamin is already active and ready for the body to absorb and use, you can ensure the best effect from your dietary supplement.

What does vitamin B12 do in the body?

Vitamin B12, or cobalamin, is a water-soluble vitamin that is involved in several important processes in the body. *Among other things, it contributes to the normal functioning of the brain and nervous system as well as to a normally functioning immune system. It also contributes to cell division and blood formation, which in the long run counteracts fatigue and exhaustion. In addition, it is important for burning carbohydrates, proteins and fats.

Vitamin B12 is found naturally in meat, fish and dairy products and the main source is offal. The body can store vitamin B12 in the liver but cannot produce the vitamin on its own, so we need to get it through the diet. 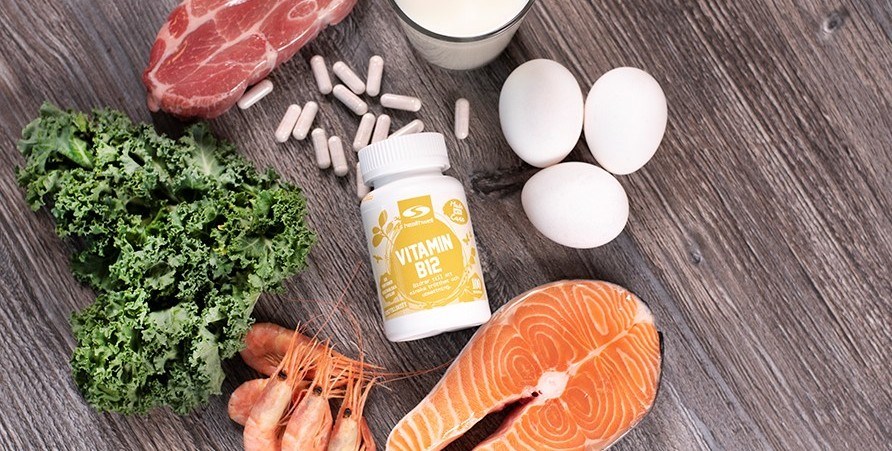 Vitamin B12 is mainly found in animal sources such as meat, fish and dairy products.

Lack of vitamin B12

Vitamin B12 is important for the formation of blood cells to function normally, and too low an intake of the vitamin can lead to anemia. Common symptoms of B12 deficiency include fatigue, dizziness, difficulty concentrating, headaches and palpitations. B12 deficiency is most common in people who eat a vegetarian or vegan diet, as the vitamin is basically only found in animal products. Older people can also develop decreased levels of the vitamin because the ability to absorb the vitamin decreases with age. A dietary supplement with vitamin B12 can then be invaluable to avoid a B12 deficiency.

Can you overdose on vitamin B12?

Because vitamin B12 is a water-soluble vitamin, any excess is excreted in the urine. There is no evidence that high vitamin B12 intake can cause side effects or be harmful.