Healthwell Maitake is a high-dose fruit body extract from the mushroom maitake (Grifola frondosa), also known as hen-of-the-woods. Maitake has long been used as a so-called medicinal fungus in some parts of the world. This is due to the fungus' active substances, which include polysaccharides, antioxidants and vitamins. Healthwell Maitake has completely plant-based capsules. 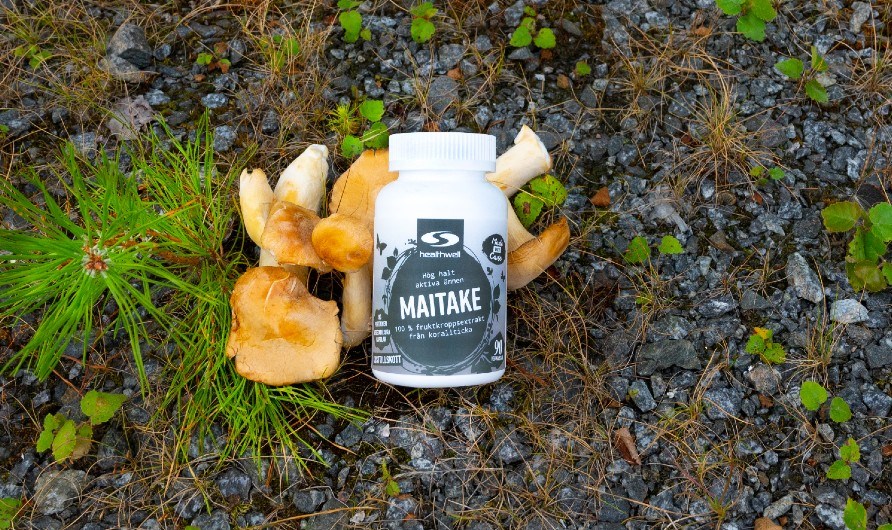 Maitake (Grifola frondosa), also known as hen-of-the-woods, grows naturally on old, dying trees or dead trees like a coral. It grows like a cluster from a trunk, the caps unfold and become dark grey or brown in colour, the underside and base are white. The fungus is most common in Japan and North America, but can also be found in Europe. Today, maitake is grown indoors on shavings from various great trees under controlled conditions. In Japan, maitake is called the king of mushrooms due to its weight and size. The weight can amount to 20 kilos!

There have been studies on maitake where their properties have been investigated, among other things, for its invigorating effect, positive effects on the immune system and blood sugar control. However, further studies are needed to be able to draw any conclusions. However, maitake is naturally rich in minerals, vitamins, polysaccharides and substances with antioxidant properties.

The mushroom maitake is available both as an extract and a powder and can be used as a supplement for periods of time or as part of a lifestyle. It is advantageous to divide the dose to several times during the day. Recommended dosage for Healthwell Maitake is 1 capsule 1-3 times daily.