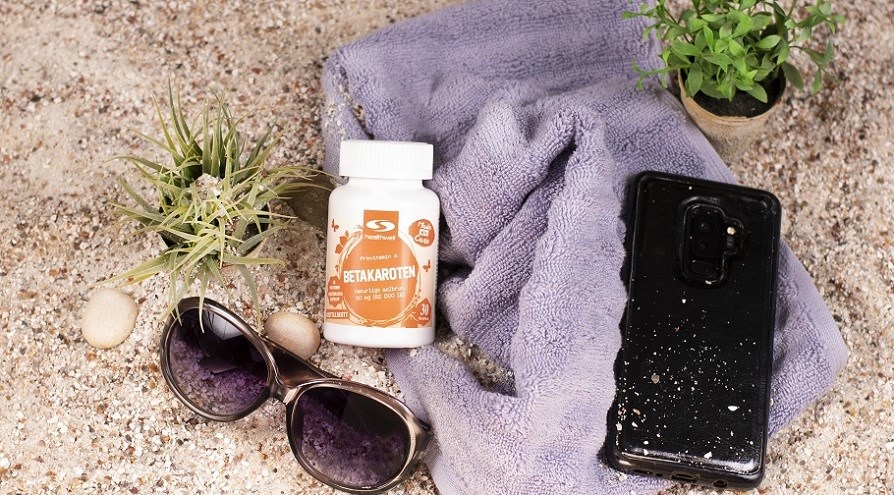 Betacarotene is stored under the skin and gives it a different shade.

Beta-carotene is a precursor to vitamin A, which is stored in the fatty tissue under the skin and then converted to vitamin A when the body needs it. When you eat excess beta-carotene and the substance is stored, your skin takes on a different hue and receives some protection in the sun. The substance is fat-soluble and is therefore more easily absorbed if you take it with some fat. If you're going to get beta-carotene from your diet, it's mainly from carotene and beta-carotene, which can be seen as the plant sources of vitamin A and are found mainly in vegetables. It is carotene, for example, that gives carrots their orange colour. The substance is also found in spinach, kale, papaya and mango, among others.

Beta-carotene supplements contain a concentrated dose that is difficult to ingest through food. Healthwell Beta-carotene contains 100% natural beta-carotene from the mushroom species Blakeslea Trispora. One capsule contains as much as 50 mg of beta-carotene, which is equivalent to 82,000 IU of provitamin A. MCT oil is added to the capsules to make the beta-carotene more easily absorbed by the body, as it is fat-soluble. Thanks to the inclusion of MCT oil, you don't have to worry about swallowing the capsules right at mealtime. The supplement is completely vegetable and is also suitable for vegans. 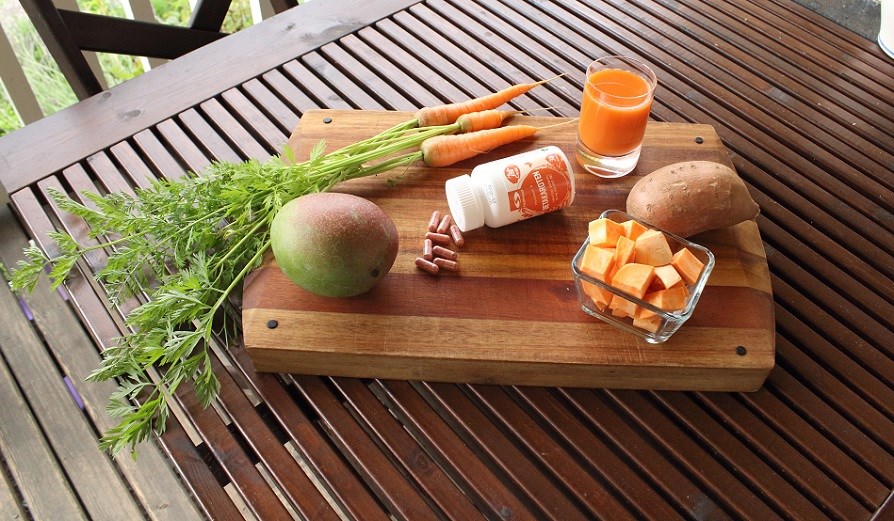 Supplementing with beta-carotene is a convenient way to get enough of the substance.

Why should you eat beta-carotene?

The skin needs time to store beta-carotene for a visible effect, which is why it is recommended to eat beta-carotene daily for at least ten weeks before you plan to spend a lot of time in the sun for the best effect. The effect of beta-carotene is gradually visible and builds a good foundation for the sun season.

In addition to a beautiful skin tone, beta-carotene can also provide some protection against the sun's harmful rays. Beta-carotene acts as an antioxidant in the body, helping to prevent free radicals from breaking down our cells during oxidative stress. Oxidative stress occurs, for example, when we sunbathe and expose ourselves to the sun's rays. However, it is important to remember that beta-carotene does not protect the skin from harmful UV rays. A sun protection factor is still a must if you spend a long time in direct sunlight.

Does beta-carotene have any side effects?

If you follow the recommended dose, there are no known side effects of beta-carotene. The body can convert beta carotene to vitamin A when needed, which prevents vitamin A from being overdosed.

However, heavy smokers should not take beta-carotene supplements. In fact, the effect of its antioxidant properties may be the opposite, leading to an increased risk of side effects from smoking. The recommended dose of Healthwell Beta-carotene is 1 capsule per day with a generous amount of liquid.