Wheatgrass ECO from Healthwell is an organic powder with nutritious wheatgrass. Wheatgrass has recently become very popular in health contexts and is often used in juices and nutritious shots where it contributes with a fresh taste with a bit of a bite. Wheatgrass ECO from Healthwell is grown outdoors in fertile soils where it gets plenty of natural sunlight and is watered with clean water without pesticide. Wheatgrass contains a large proportion of nutritious chlorophyll, amino acids, minerals, vitamins and enzymes that are good for body and soul. Despite its name, wheatgrass is also gluten-free and is a popular product to use in connection with detoxes of various kinds.

Wheatgrass is made from the seed leaves of wheat and is harvested when it is between 10-20 cm tall to be dried and turned into wheatgrass powder. The process is adapted so that as much of the nutrients as possible are preserved. From the time the grass is harvested to the time it becomes powder, it therefore takes a maximum of one hour.

What is wheatgrass good for?

Wheatgrass is similar to the grass found in the average garden; it has long and narrow green blades. It is a grass that is rich in nutrients and contains, among other things, chlorophyll, amino acids, vitamin E, calcium, zinc, iron and copper. Chlorophyll is the substance that colours plants green - it works much like the hemoglobin of plants. It is a substance rich in antioxidants. Chlorophyll is most easily found in dark green plants, such as spinach, broccoli or wheatgrass. Wheatgrass contains almost 50% fiber and is rich in protein. Despite the name, wheatgrass does not contain gluten, so the product also works for those who are gluten-intolerant. Wheatgrass is often used as an ingredient in beverages and healthy dishes of various kinds. 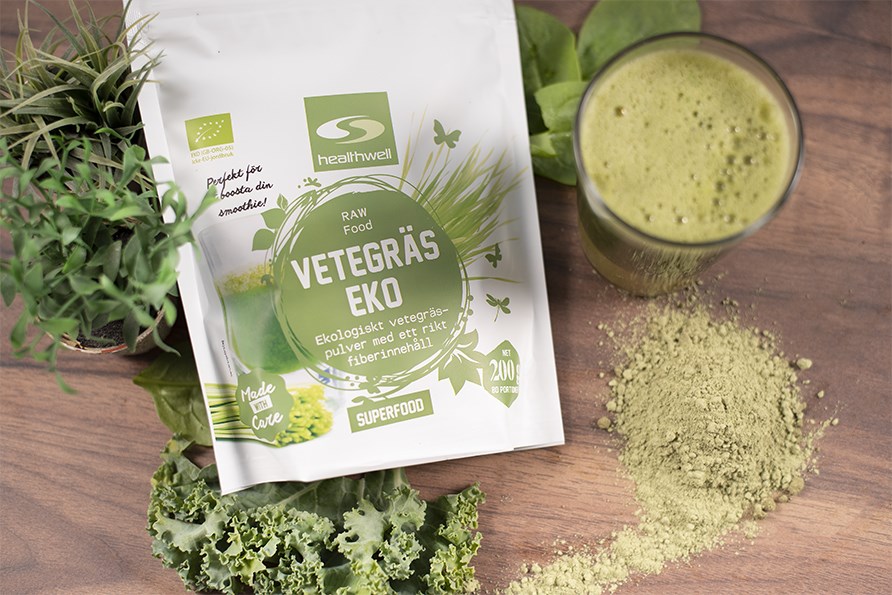 Wheatgrass is a common feature at many juice bars and cafes where healthier beverages is served. But its also easy to make a healthy drink at home! Try to start the day with a healthy and nutritious shot by squeezing your own orange juice and mixing in a teaspoon of wheatgrass. The taste of wheatgrass can seem a bit unusual for those who have not tried it before, and juice is therefore a popular choice of drink to dilute the taste. You can also make a smoothie with wheatgrass and mix it with, for example, berries, banana, kiwi and yoghurt!

Can you get side effects from wheatgrass?

The recommended dose of Wheatgrass ECO from Healthwell is ½-1 teaspoon daily and then increase the dose gradually to ½-1 tablespoon. This is so that the body has time to get used to it. Eating too much wheatgrass can cause side effects such as stomach problems and nausea.

What does it mean when we say the product is EU-organic?

In organic food production, biodiversity, the conservation of natural resources, environmental practices and strict animal welfare are observed (1). In order for a product to be labeled as EU-organic, the label used within the EU, a product must meet strict conditions that apply to the entire production chain. The product must contain at least 95% organic ingredients, and in addition, the other 5% must meet other strict conditions (1).

In organic crop production, it is important to promote soil fertility and to allow for perennial crop rotation and a cycle of organic material. Therefore, fertilizers, compost and plant protection products should only be used if they comply with the principles and objectives of organic production. In general, the EU requires that an organic food must be produced without synthetically produced chemical pesticides and without artificial fertilizers. In organic production, genetic engineering is also prohibited. In addition, production should primarily rely on renewable resources (2).